CAYMAN GANG OF FOUR TO VICTIMS: IF YOU WANT YOUR MONEY, YOU MUST RETRACT ALL THE NEWS ARTICLES FROM THE INTERNET
Share This

In August, 2015, when one of the victims of the Cayman Gang of Four approached Sharon Lexa Lamb, considered to be the Gang ringleader, she told him that, if he wanted to receive the money and stock in his account, he would have to sign what amounted to a general release. Additionally, he would have to see that retractions were published, regarding articles detailing the crimes committed by the Gang of Four. The retraction document appears below.

Here is the document that the victim was told, by Lamb, he must sign, as well as his adviser, who was the whistleblower publishing some of the articles, to get his assets back: 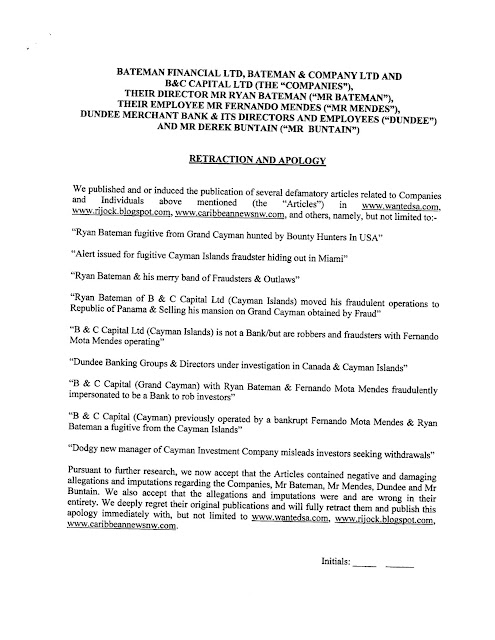 You may not recognize all of these articles, as some have been published on other website, under other titles. The document amounts to a retraction, and an apology. The victim, of course, had no role in any of the articles cited, nor did he contribute any information whatsoever to the journalists who wrote them.
Thus, not only did the Cayman Gang of Four steal millions from accounts at Dundee Merchant Bank, but they want the news of their crimes retracted from the Internet, and a general release from the victims, prior to (possibly) disbursing back to them, some ( but not necessarily all) of their money.

The arrogance of the Gang of Four, who are Sharon Lexa Lamb, Ryan Bateman, Derek Buntain, and Fernando Moto Mendes, apparently know no bounds. It is now time for justice to be served.